How does a meat thermometer work?

A meat thermometer consists of two parts, the temperature rod, and the display. You push the rod into the meat by pushing on the dial. Once the meat temperature starts to increase, the rod transfers this heat to the dial, which starts to keep track using a smaller dial. This thermometer uses the fact that different metals contract and expand at varying temperatures. The thermometer rod is made from two metals that are different but are molded together. One metal expands at a higher temperature while the other at a lower temperature. The heat of the meat makes the metal strip bend or twist. The twisting signals the dial which makes a readout on the display of the thermometer. The metal starts to expand when it isn’t being heated any longer and the dial winds down.

What is the purpose of using a thermometer when cooking?

The most important reason you should use a meat thermometer when cooking is to ensure the food is safe to eat. Raw meats contain many pathogens and foodborne illnesses such as norovirus and salmonella. When the meat reaches a specific internal temperature, these pathogens are unable to survive and food becomes safe to eat. Another reason to use a meat thermometer is because you can’t always rely on your senses when it comes to cooking meat. Sometimes a roast may look done but can be red on the inside. If you are planning to serve meat to guests, the only way to check if it is done is to cut it to see the inside, but this will ruin the look of the meat and even the flavor.

How to use a meat thermometer?

For the most accurate reading of the meat’s internal temperature, use the thermometer in the meat when it is still cooking. A common mistake that should be avoided is taking the meat off the heat when trying to read the temperature. You must always make sure you are measuring the right part of the meat. The meat thermometer should be inserted into the thickest part of the meat that you can find. It should be inserted into the meat at least half an inch deep, but if your meat is very thick then you should get deeper to properly reach the center. Meat thermometers can also be used on other food such as stuffing inside meats. The juice from meats can drip into the stuffing when it is being roasted, so the stuffing must also reach a proper temperature to be safe. 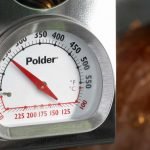 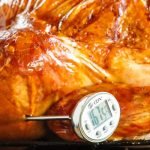 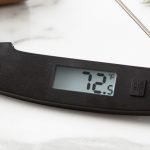 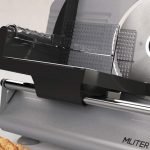 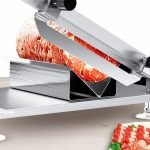