Most, if not all kitchen appliances these days are perfected to such a degree that users are only required to put in minimal effort. Electric can openers are a perfect example of these gadgets that have significantly improved the lives of kitchen gurus by making opening cans easier and faster. Different brands offer different features, so be wise when making decisions by going for the attributes that you need the most. Reviews are a great way to evaluate these products. Lots of users of can openers have left their comments for each of our recommended products to help you make a more informed decision, so follow through our analysis for more information.

The One Touch Automatic Can Opener Review 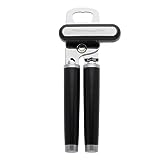 This Hamilton Beach automatic can opener is designed in a very special way to support cutting along the sides of a can rather than from the top. This works well to prevent food from splashing out. The lever of this handheld electric can opener has an ergonomic emphasis, which requires minimal grip strength from the user to operate. This product can open both regular and pop-top cans. And for the design fans out there, the sleek chrome and black color appearance clearly distinguish this electric device and I think would definitely be a stylish addition to your kitchen appliances.

We have some very impressed review writers here, who absolutely recommend this product for the ones who are looking to buy the best electric can opener in the market. One person likes the way the power cord, which itself is sufficiently long, can be stored inside the appliance itself. Other people like to mention the “Smooth touch” feature of this can opener, which enables users to use the product very easily without much physical effort. Besides, the appliance has a neat working style as it leaves the can’s edges smooth and doesn’t splash out any food.

On the other hand, a significant proportion of criticizers have noticed that once this product gets a few months old, some remains of metal start to appear on the can and the opener itself. They see this as a risk of consuming these metal parts with their food and I personally think that this implies some danger.

For your information, this is the best rated electric can opener among the list of our recommended products.

The Cuisinart Deluxe features a quality engineered motor system to provide convenience and power to its users. I think that the most distinguishable attribute is the single-touch operation, which not only sounds good but is designed to help consumers ease their lives. The product can work with any standard sized cans. Another great feature is that the activation lever, which has the power cutting blade and the magnetic lid holder attached to itself, is removable and the appliance can be cleaned easily.

The comment writers do confirm that the device is easy to clean. However, people are content with their choice, because the can opener is easy to work with if you tend to have arthritis frequently. Others appreciate the product and feel that it’s reliable, even after 2 years of usage. One person bought this for her mother, who was aged quite high and could hardly apply significant amount of force to operate an appliance. However, the Cuisinart Deluxe satisfied the old lady’s needs, who really managed to work with the device.

Whilst many customers are delighted with their choice, some have noticed potential disadvantages. People claim that the product serves them for a short period of time and becomes obsolete within a few months of using. I share people’s opinion that the brand name may be misleading as reviewers report that the quality is not of a sufficiently high level.

We have our first hands free can opener here with Black & Decker’s Spacemaker. The product is quite universal as it features a power pierce cutter, a knife sharpener, and a bottle opener. A lot of accent has been placed on the convenience component of this appliance since it is designed to save space just like other under cabinet electric can openers. The operation with this product is hands-free, the most effortless working product so far. Opening big and tall cans is not a problem as well.

This electric can opener for large cans is loved for its great quality, which allows for flawless working without any occasional spills. Apart from its core functions, people are amazed by the well-functioning knife sharpener and bottle opener available on the appliance. Another good highlight from positive reviewers – the product helps them make space, which in my opinion is a great advantage over competing products.

Nevertheless, no kitchenware is free from criticism. People have found it difficult to place cans correctly under the cutter to continue with the can opening. I think there must be a real problem with the control mechanism since a significant amount of folks are complaining about this.

This Proctor Silex product is one of the best handheld electric can openers around. As the name suggests, it has an extra tall height, which supports working with different sized cans, including the tall ones. A knife sharpener is available on the back and gives this appliance some versatility. The cutting lever is removable to allow its users an easy cleanup. Furthermore, the magnetic lid holder is designed to avoid spills by holding the lid and preventing it from falling down.

I have to share that the first reviewer I saw was absolutely in love with this Proctor Silex can opener. He was extremely appreciative of the reliability and versatility of the product, which works for cans of all sizes. I am not surprised that other positive comment writers share this person’s opinion. Another highlight from the lovers of this can opener – they think it is absolutely easy to use and easy to cut.

However, surprisingly enough, lots and lots of people refute the reliability attribute and tell stories about how their choice was the worst. People suggest that the can opener stops working after only a few times of using. I think that the highly contradicting experiences mean that this product is prone to arriving with defects. The knife sharpener has not particularly impressed consumers either, who describe it as “fake”.

Now we have our first battery operated can opener to look at. The flaw of operation is completely effortless, requiring only a single touch of a button to open a can of any size. The cutting system itself is innovative, creating a resealable smooth edge lid by cutting from the sides. A very nice feature – this kitchen device self-adheres to any can and opens it automatically. The product needs AA batteries to operate, which are included in the price.

Reviewers report mainly on the benefits that a cordless can opener can bring to a user. The operation is fairly simple, requiring minimal effort. One person had upgraded his review from 4 to 5 stars because the product had served him reliably. He also described that the button needs not to be pushed for more than 1 second to have your can opened.

As the rating suggests, people are not particularly happy with this product. The blade doesn’t come off for cleaning, and that is a huge drawback. The reliability is another issue with this can opener as it wears out too quickly. I think that people have been tickled by the compactness and the easy-to-use feature that they have put some 5-star comments, but it really looks like plenty of people find this product unreliable.

Continuing with the rechargeable can openers, Instecho’s product features one-touch operation. It requires 2 AA batteries (not included), which make sure that the appliance can open thick cans twice as powerfully as other similar gadgets. The surface can be wiped with a damp cloth for easy cleaning. Folks with arthritis or hand pain can operate this can opener without hurting themselves as practically no energy is required to get the job done.

Not many review samples are available to analyze this restaurant can opener, but I will try my best. The main positive thoughts are associated with the ease of using since this is not a manual can opener, but rather an automatic can opener. In addition, just pressing on a button will do the job, which is great for people who experience hand pain. I think these are the must-have benefits that a modern can opener should have. Nothing extraordinary here.

The negative reviews prevail in this case, as suggested by the rating itself. As I have noticed, the factor of reliability makes up a prominent part of a kitchenware’s overall rating. And I am not surprised that all criticizers think this product is not worth your money since it will stop functioning properly after a short period of using it.

Arriving to our last product, this has been the only stainless steel can opener. Some prominent features of this gadget include hands-free operation, magnetic lid lifter, and power pierce cutting mechanism. This can opener works with a cord but has a special retractable storage for it. A new attribute to learn about is that the device shuts off automatically once the job is complete. An integrated bottle opener and a knife sharpener are also available on the unit.

The reviews are not abundant here either, but they were enough to make some impressions. One person appreciated the fact that her Oster can opener could open a can with smaller lips, a job that she couldn’t do with her manual can opener. This is the first product to get so many compliments on the looks. People seem to be liking the style and appearance of this kitchen appliance. Other customers suggest that the integrated bottle opener and the knife sharpener do work as intended and are not fake. The effortless operating also seems to be true, as it is reported by many users.

While the negative comment writers also acknowledge the good looks of this can opener, they are not particularly satisfied with the functional aspects of this product. Some people have struggled finding the correct angle at which they could open their cans. However, what’s worse – it turns out that the motor is weak and sometimes you will have to use it as a manual can opener to finish the job. Another drawback, which I think is important to know, is that the product may leave metal shavings around after opening cans. So, beware, your food may get contaminated with these.

When was the electric can opener invented?

The first can openers have been reportedly used in the Netherlands since 1772. However, those to have been patented in the United States were not until 1858. These old versions were merely a variation of knives and were quite difficult to use for an average consumer.

The next stage of can openers’ evolution came in 1925 with a modified design featuring a serrated wheel to hold the can in place while cutting. Finally, as the world became more technologically advanced, we were introduced to the first electric can openers in 1950 to save a great deal of effort from users.

How to use an electric can opener?

As you have seen previously, there are multiple versions of electric can openers with different features. However, most of them work in a similar way.

Follow these 5 simple steps to use your electric can opener:

– Lift or press the lever to release the blade;
– Position the can;
– Adjust the cutter head to secure the can’s position;
– Press down the cutter/push the button to open the can – do it slowly to avoid splashing;
– Finally, remove the lid from the magnetic lid holder safely.


A product price updated on 2022-08-22 / Disclaimer: as an Amazon Associate a Skillet Director team earns from qualifying purchases.

* only verified buyers can leave a review.